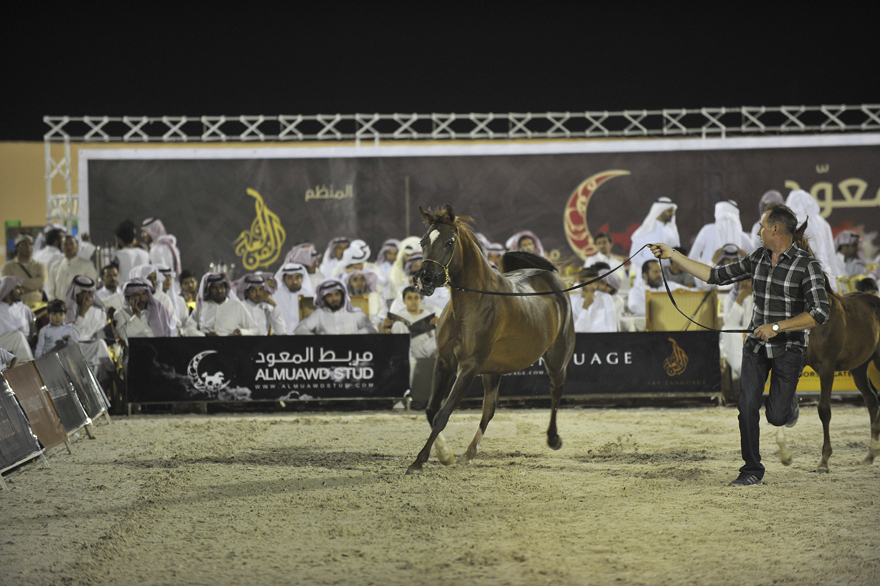 Al Muawd Stud Fifth Annual Auction was held on Friday Oct. 17th, 2014 in Riyadh city. The auction was got an elegance organization and decent hospitality. Horses’ owners and lovers flocked from all over The Kingdom, Gulf Arab states and Arab countries, where audience numbers exceeded expectations with 1500 guests at its peak.

The auction was resounding success, the 96 horses of auction have been sold, breaking a new record of purebred Arabian auctions.

The highest sale price went to GP PARADISA (Gazal Al Shaqab’s daughter & in foal to Fadi Al Shaqab 2013) for 420,000 SR. Total sales reached 7,960,000 SR in a unique precedent in the Middle East in the field of Arabian horses.

Auction organizers offer their deep gratitude for each of who has honored auction with his attendance and participation.

Thank you Al Muawd Stud for your support and assistance to success the auction by providing all displayed horses with market price, and providing mares in foal of globally stallions such as world champion 2014 Fadi Al Shaqab, Paris word champion EKS Alihandro, Dubai Silver champion Revolution and other prominent siring stallions. As well as, golden and silver winner horses at level of Arab Gulf, Europe and UK.